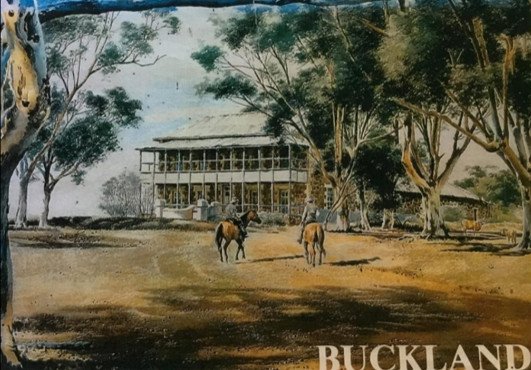 The European settlement of Western Australia was established in June 1829. In January 1830 a London merchant Charles Pratt arrived from England on the schooner the Eagle. Charles Pratt (1791-1853) and his brother-in-law Captain James Solomon were partners in the schooner.

During the trip Pratt met a young seaman known as James McLeod Dempster and when they landed in Fremantle he offered Dempster a job. Dempster who was born in Scotland in 1810 came from his family property which was known as Muresk. Later the name was used for the property now known as Muresk College in the Avon Valley.

James Dempster was known as a colourful character with a varied career, he later captained Pratt’s ship and also bought his own schooner known as the Mary Ann and traded between Australia and Mauritius.

Later he went to manage Buckland Homestead but Pratt was known to hold a grudge with him after his only son Edward, (Dempster’s best friend) died in a yacht race off Rottnest. Dempster went to sea again which wasn’t successful so he moved back to Rottnest where he became the Superintendent of the penal colony in 1850. He reconciled with Pratt and moved back to Buckland in April 1853.

During the 1840s Western Australia had suffered a deep depression and there was little building or development occurring, particularly given the the harsh and dry conditions. Therefore in 1849 the WA Government finally allowed the transfer of convicts from Britain to WA. The first convicts arrived in 1850 and this was the catalyst for development and progress to begin. By this time Dempster had taken a lease on the Buckland property from Pratt. Edward Dempster and his wife Mary Margaret (nee Taylor) lived in the west wing, they had 7 children. During this then following Edward’s suggested to his father they decided to build the new Victorian Georgian two storey section. The homestead then comprised 22 rooms and became the gracious building that still stands today.

Construction started in 1874 with the French stonemason Peter Brehaut (various names include Brehant) (1829-1888) who was a stonemason and had been sentenced to ten years for burglary in Jersey. In 1862 as one of 500 convicts Brehaut arrived Fremantle on the York. He and other ticket of leave men (ex convicts) built the stone granary, the home and other buildings on the site between 1866 and 1876. Buckland Homestead was completed in two years and it became the largest privately owned building in the colony.

Two of Dempster’s sons achieved distinction for their exploration, community work and pioneering. His sons including Charles and Andrew under took sea exploration off the SW coast and ended up with a lease in Esperance of 304,000 acres where they farmed sheep, cattle and horses and opened up the first stock route (800m kms) Esperance to Perth. Charles then managed Buckland 1866 – 1867, inheriting it later.

During the early period there where many buildings built apart from the main home and cottages including stables, blacksmith shop and a school on the property which operated from 1868 – 1876 and was considered one of the best bush schools in Australia at the time.

Charles then married and stayed at Buckland until 1877 after which he set up a business in Toodyay and later Northam.

Edward Dempster then leased the property for a year and negotiated to buy out his sister Annie. Edward and his wife Maud moved into Buckland when they married in 1878. They entertained people both from across the state plus and International dignitaries to the property for afternoon tea parties who where amazed at the quality of the farm, crops and waterways.

James and Anne Dempster were still residing in Buckland however his wife died in 1880 and he remarried three months later to Hester Francis Shaw.

James Dempster died in 1890 aged 80 after falling from the top balcony, breaking his femur bone and incurring Bronchitis. There was an elaborate funeral service for him with train loads of people attending from Perth.

His son Edward died two years later aged 47 leaving his wife Maud then aged 29 years a widow with 6 children, one only 2 weeks old. Having a strong desire to support her children Maud Dempster took the farm from 600 – 3,000 cleared acres. She sent her brother to agriculture college in South Australia for two years and learnt from him on his return. Maud Dempster won many prizes and awards in local and state fairs for champion cattle, including the notable Governors Cup at the Royal Show in 1902. She was renowned for her sheep breeding and quality crops and earned a strong reputation for her work there and reputation for one of Western Australia’s best farmers. Maud ran the property until 1913 when she retired and handed the property to her youngest son Fred Dempster. The property was in excellent order when she handed it to him but his new wife thought it was just an old building and didn’t want to live there and they sold it.

In 1913 it was then bought by a flamboyant wealthy man called Samuel Peter Mckay (1864-1923) who ran it with his Aboriginal servants and chauffers. He also had a strong interest in race horses and built a racecourse to the west of the home. He planted the rows of gum trees, fully renovated the home, including new parquet floor in the drawing room and lavish ceilings and features. Buckland again became a prominent destination for the social scene and the Buckland Balls became famous along with many charity events for the Red Cross. The highlight for them was in 1915 when the then former premier Sir John Forrest visited Buckland. The glittering era came to an abrupt end when Sam Mckay was stricken by illness and had his leg amputated. He became a recluse and died in the eastern states in 1923.

Mckay’s son Keith took over the property but was killed a year later in one of the States first airplane crashes when he was flying a bi plane near Port Hedland and crashed into the harbour.

During the 1920s and following the death of Keith Mckay the land was divided, into 59 Soldier Settlements blocks. This scheme was not very productive, and some of the land was later amalgamated again.

Buckland has changed hands several of times. During the 1980s the homestead was classified by the National Trust and included on the Register of the National Estate and was open to the public.

George Oliver and Cameron Scott held the property from 1924 to1926 and sold it to a John Garland and his son John Stuart Garland who sold it two years later to Angus McIntosh a farmer from Victoria in 1928 and the property was owned by the McIntosh family for next 50 years.

Angus and his wife Sarah McIntosh who had four daughters and a son also experienced economical difficulties with the smaller land but they did their best to also renovate the home and bring in quality antiques and artwork. He died in 1943 and his Sarah moved to Perth. Her only son Sinclair continued on the property and introduced modern farming techniques and contours which took more water to manage and the properties extensive gardens suffered.

The greatest challenge to Buckland Estate was the Meckering earthquake which was the strongest earthquake registered in Western Australia with an epicentre only 30 kms from Buckland which damaged and demolished most of the out buildings. The Government Engineer and other people where impressed how due to its constructed by Brehaut and his team that the main home apart from two damage chimneys, withstood the forces of the earthquake in 1968.

Michael and Deborah Hector held the property for two years from 1979 to 1981 during which time they carried out extensive renovations and removed all the demolished stonework, these remnants today would be of heritage interest.

In 1982, Buckland Homestead & Farm Buildings was purchased by Anthony David Motion and The Honourable Penelope Mary Motion. The Motions both immigrated to Australia in 1969. Their decision to buy Buckland was immediate when they fell in love with it at first site. The Motions had a long history from family Estates in England dating back to the 13th Century. They also carried out some decorating and filled the home with elegant antiques and artwork. They opened the home to public viewing, set up car museums on the property and redeveloped extensive gardens including the planting of 3,000 eucalyptus trees across the property.

The property was then acquired by Tony Marwick in 2000 who held it for 18 years. He later sub divided the last 600 acres leaving the home standing on its current 54 Acres.

The current owners acquired the property in September 2018 and are currently undertaking extensive renovations, landscaping and conservation to the Granary and other stonework to the building. Their view to restore Buckland to its former glory, enhancing its historic importance and making it more accessible to the public.